2017 is fast approaching, and I can’t wait for it. That’s because next year we will see the release of all three books in The Luminous Legend trilogy. I’ve been hard at work on these high fantasy novels for well over four years now, and although I’ll still have plenty of revisions and editing to do throughout early 2017, there is so much satisfaction in knowing that their completion is on the horizon.

I don’t have any new updates on the progress of the writing, but what I have here are some amazing pieces of artwork that I had commissioned over the course of 2016. I was lucky enough to work with some very talented artists who made characters from my stories come to life with all manner of tools; pencil, marker, watercolor, digital effects, even tea stains!

I’ve already posted these beautiful renditions on my social media pages and flaunted them off to my friends, family, and beta-readers, but there’s more than just the finished products here. For the very first time, I’m proud to show some of the preliminary sketches and work-in-progress updates that eventually lead to each completed work.

I hope you enjoy a look at these characters, and I hope who you’ll be excited to meet them next year in the adventure throughout The Luminous Legend!

As the heroine of the story, and definitely my favorite character, I had to have a piece of artwork done for Raissa.

I’ve mentioned in the past that The Legend of Zelda video games have always served as my greatest inspiration behind the story in The Luminous Legend, and the world of Tordale, where it all takes place. For both her role in the adventure and her appearance, Raissa was undeniably modeled after the many iterations of Princess Zelda. Raissa is a young princess who has unexpectedly been thrust into a position of total command over the entire kingdom–and that’s before a terrible foe rears its ugly head. She’s as vivacious as any 21-year-old girl, but she also has the ability to confront both tremendous responsibility and challenge.

That blend of tenderness and power was precisely what I wanted Nino Vecia to capture in this image. I instructed him to portray Raissa commanding a mighty magical spell, yet one that was also beautiful. His early sketch shown above fooled me, at first; I assumed that he would have her standing in a field of tall grass. His final piece placed here in a setting that was certainly different than what I anticipated, but it followed the theme perfectly. Here, you see exactly what I want readers to see out of Raissa throughout the story–a beautiful, loving girl who houses unimaginable abilities.

Raissa was created all through digital art by Nino Vecia

Hinton and Pauma, the Bachus – by Dara Gold

There are all kinds of creatures roaming the land of Tordale, including a number of different races which show up throughout the story. If I’m most proud of any, it’s probably the Bachus–an energetic, fun-loving mammalian race who primarily live in an extensive series of tunnels and caverns beneath the largest woodland in Tordale, Sleekleaf Forest.

The characters of Hinton and Pauma are a husband and wife who show up midway through the first book and eventually tag along the rest of the heroes. They’re not exactly who you’d expect to find helping out a quest to save a kingdom from an enemy that threatens complete destruction–they offer plenty of comic relief, and are more than prone to a squabble or two between one another. Even still, this very loving couple prove on more than occasion that they’re capable of their own heroics. They also take part in some of the more heartwarming scenes throughout the story; they’re especially attached to our young heroes Alamor and Raissa.

I always thought of the Bachus as being similar in appearance to badgers, albeit, near-human-sized, and with a great collection of quills at the end of their big, bushy tails. Artist Dara Gold nailed their looks, and she also captured their personalities so well. Hinton and Pauma are inseparable; wherever one goes, the other is proudly by their side. They’re usually as upbeat as you can ask two living creatures to be, even if the situation may turn a little dire.

The piece above was a quick sketch done by the Dara with pen and pencil, which acted as a jumping board for her artistic speciality–tea stain. Using tea (yes, the same kind you drink) like paints and oils, she set the outline of Hinton and Pauma, as well as the environment. Once that was in place, she inked in the finer details. Below is an abbreviated look at the multi-step process she went through to create the final image, which appears at the end. 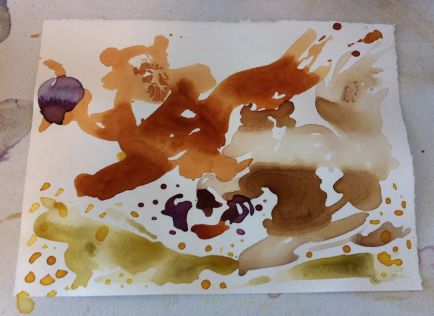 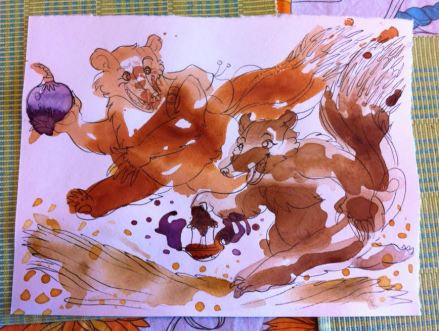 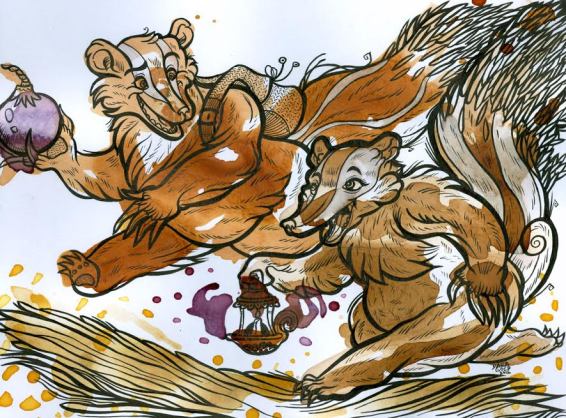 It’s hard to talk about the villain in The Luminous Legend without giving away a load of spoilers, as much of his allure is that his past and his motivations are shrouded in mystery for a good chunk of the story. It’s all chilling stuff, in my opinion, but I certainly can’t give it away here before you might read the books!

What I can say is that I wanted the type of villain who was threatening and imposing without having to utter a single word or move a finger. Baldaron is an absolute mountain of a man; he towers over most humans, and even compares to members of the Baroso, a race of beings in Tordale who are essentially bipedal grizzly bears. This guy could wipe the floor with most Street Fighter characters.

When dreaming up the Baldaron, I always envisioned his appearance as sort of a cross between Ganondorf from The Legend of Zelda games, and The Undertaker of pro wrestling fame.

Interestingly, this piece of artwork was originally going to be a full body shot of Baldaron. Just as artist Kevin Briones was about to start work on it, I called an audible and had him do a bust, instead. I felt that showing Baldaron up close and only from about the chest and up would serve his pose a lot better. The end result accentuates the power of his stance far more than it would have showing his entire body.

Last, but not least, is a piece of art that I’ve shown off here in the past, but I love the character so much that I have to yap about it just a little bit more

Samuras, the Queen of the Ocean – by Colin Lawler 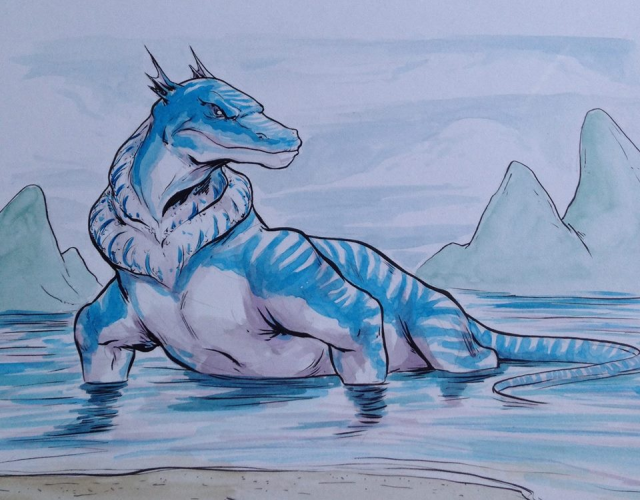 For those who aren’t aware, I’m a huge Godzilla fan. I mean, a complete fanatic for the Big G. I’m a giant monster nerd, altogether, having grown up watching King Kong, Mothra, Gamera, and the like. I managed to toss my love of giant monsters and Kaiju into The Luminous Legend, which features a couple of my own titanic beasts.

Above is Samuras, a sheer leviathan who could pulverize a battleship. She roams the oceans diligently, guarding it and its creatures against those who she deems a threat to the tranquility of nature. Although a living, breathing creature of flesh and blood, she’s revered as something of a deity by the Onda, a race of intelligent, reptilian people who live on various islands throughout the ocean. She’s neither good, nor evil; she is a wild animal driven purely by instinct to protect her domain and the natural order of things.

Still, she comes off as a [tremendously] powerful ally to the heroes of the story, as there are other huge beasts under Baldaron’s command that begin to threaten the peace of the ocean. Writing Samuras’s scenes were probably my favorite experiences working on the books, especially the epic battle where she goes toe-to-toe with another sea monster just as large as her, in what becomes a brawl like something straight out a Godzilla movie.

While working with artist Colin Lawler, I advised him to portray Samuras with a very regal aura. She’s an intelligent creature, both majestic and beautiful. Despite being a walking force of nature who possesses unimaginable strength and ferocity, she is stunning to behold. Her appearance was inspired by two different creatures from the Monster Hunter series of video games, of which I’m a big fan. The first was the monitor-like Royal Ludroth, and the second was the electricity-fueled, serpentine Lagiacrus.

If you enjoyed the little gallery I provided here, keep an eye out in the future for further showcases of art that I may have done The Luminous Legend. I can promise that I’ll soon have a feature that goes into detail on the commission I had done of Alamor, the main character of the story, and who you can see in this webpage’s banner at the top. I also hope you can pay a visit to each artist’s website and check out their amazing portfolios, or follow them on any of their social media channels.