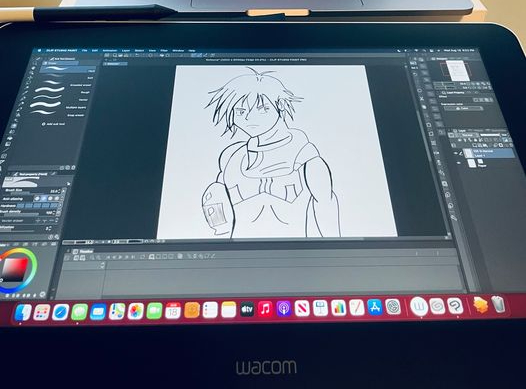 This is certainly late as far as a “summer” update goes. According to the calendar, we’re closer to Halloween than we are to the 4th of July. But all this means is that it’ll be a much shorter gap than usual before my next seasonal update after this!

Just a few weeks ago, I finally took the next step in my artistic endeavors that I’ve been looking forward to for a while. I have now begun the transition to digital art. After weeks of research to determine what products would be best for my current skillset and for what I ultimately want to accomplish with drawing, I ended up getting a Wacom One tablet alongside a MacBook Pro. Said MacBook model came with a hefty amount of storage (1 TB, to be precise), so I should be able to use this for a long time as I’m storing all of the files I draw on Clip Studio Paint.

Choosing what art software I wanted to use took some deliberation. I’ve always heard very nice things about Photoshop, but for now I’m content to work with Clip Studio Paint, which is especially good for anyone who wants to draw comics. There are a host of different features and tools tailored to manga and comic creation, which is exactly where I want to end up someday. If Clip Studio Paint is what I’ll one day be using to format my eventual comic series, I’m better off becoming familiar with the program sooner rather than later.

I’ve primarily spent the last couple of weeks just getting adjusted, since there are a dizzying number of features I need to learn on Clip Studio Paint, and just because drawing on the tablet screen feels quite a bit different from drawing on paper. It’s almost like starting my drawing studies all over again, in some respects. I don’t have too many completed pieces to show here, but there were a couple full body character sketches to show what I’m working with and the direction I hope to go.

The last two you can see below were actually done on paper. They were two of the last drawings I didn’t before I started learning digital drawing, and I consider them two of my better drawings thus far. I’m particularly proud of them because I’ve drawn both characters before (Wonder Woman, and Hayato from Fire Emblem: Fates), but never full body sketches like that. Just a year ago, I could only draw characters from the chest up, maybe from the waist up if I was feeling particularly ambitious. Thanks to the lessons I’ve taken now, I’m becoming much more capable of drawing full characters.

Over at Zelda Universe, we had a very exciting summer with a new trailer for Breath of the Wild’s sequel shown at Nintendo’s E3 presentation, and the release of Skyward Sword HD for the Switch. I’ve written a good mix of editorials, lists, and columns since the last update, including a piece that highlighted the similarities between The Legend of Zelda and Studio Ghibli movies. But my favorite thing that I’ve written lately was a piece examining how one particular outfit in a couple of Zelda games appears to be an homage to the Mexican Luchador, La Parka. As a lifelong fan of professional wrestling, it was a ton of fun to write out that wild and whacky sport alongside my favorite video game series. It was even more satisfyingly to see all of the comments on Zelda Universe’s social media channels of fans mentioning how they remembered the wrestler La Parka, or just their general amazement at the connection between him and the one costume in Breath o the Wild and Age of Calamity. It was great to learn that so many Zelda fans are also pro wrestling fans just like myself!

Realm of Memories: The bear riders of Meadela’s Mantle

What will a Legend of Zelda mobile game look like?

Zelda’s Study: The Radiant Set is an homage to a famous Mexican professional wrestler