I’ve been a giant monster fanboy for a very long time, just about all of my life. I can still can remember that day I was walking through a Toys R Us store as a three-year-old with my parents, and my eyes were eventually drawn to a VHS copy of King Kong vs. Godzilla. When I watched it with my family back home later that night, and we watched Godzilla’s introduction where he emerges triumphantly from an iceberg, it was love at first sight.

Something about that big, atomic fire breathing lizard just resonated with me as a youngster. Kong was pretty cool to me, too, as were so many of the other giant monsters I would go on to see in films and television, primarily those of the Japanese variety (Kaiju). They came in such a wide array of sizes, shapes, colors, abilities, and personalities, but all fearsome and awe inspiring in their own unique ways. I didn’t really follow superheroes or DC/Marvel comics until my high school years, so as a kid I didn’t have much interest in Batman, Superman, Spider-Man, or Wonder Woman―my heroes were Godzilla, Kong, Gamera, and Mothra.

END_OF_DOCUMENT_TOKEN_TO_BE_REPLACED

2017 is fast approaching, and I can’t wait for it. That’s because next year we will see the release of all three books in The Luminous Legend trilogy. I’ve been hard at work on these high fantasy novels for well over four years now, and although I’ll still have plenty of revisions and editing to do throughout early 2017, there is so much satisfaction in knowing that their completion is on the horizon.

I don’t have any new updates on the progress of the writing, but what I have here are some amazing pieces of artwork that I had commissioned over the course of 2016. I was lucky enough to work with some very talented artists who made characters from my stories come to life with all manner of tools; pencil, marker, watercolor, digital effects, even tea stains!

END_OF_DOCUMENT_TOKEN_TO_BE_REPLACED

Got another one of my personal favorite short stories appearing here this week. If I recall correctly, this was the very last short story that I wrote before I began working on my trilogy of young-adult fantasy novels, The Luminous Legend.

In this tale, you’ll be following a young prince who boldly sets off to meet with a monstrous creature. There’s some debate amongst the peoples of the land as to whether the creature’s title of “The Guardian” is fitting, or if the creature is more of a menace, than anything else. My love of giant monsters naturally played a role in this story’s creation, but my greatest inspiration behind it was the famous scene in The Hobbit where Bilbo Baggins first meets Smaug and has an extended conversation with the great dragon.

END_OF_DOCUMENT_TOKEN_TO_BE_REPLACED 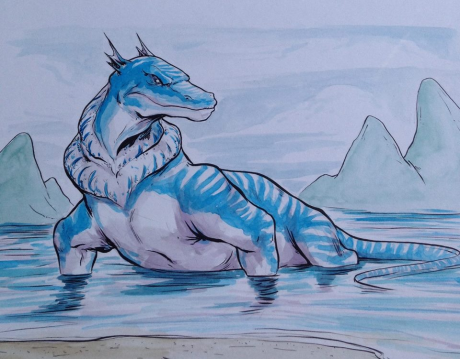 If you’ve visited this website in the past, you probably saw a very different banner from what I’ve got now sitting at the top. That beautiful piece of artwork depicts the main character from my upcoming book, The Luminous Legend, who’s name is Alamor. I was lucky enough to commission a piece from an incredible young artist named Pam Hage, which will now serve as the artwork for the cover the book. As we get closer to the release of the book, I plan to put a full write-up here on this website that details the process Pam and I went through conceptualizing the art, including some of the early sketches that she did.

The real exciting part is that may not be long of a wait; I’m happy to say that the finish line is in sight, and I expect to complete the book within the next couple of months. I think it’s fair to say that a summer release is extremely likely, at this point. So, with that said, I’d say  it’s time to drop another excerpt from the book here.

END_OF_DOCUMENT_TOKEN_TO_BE_REPLACED

I’m back! It’s been a crazy couple of weeks, but I’m here to continue the spree of short stories from my backlog. Today’s tale is an oldie; I don’t remember exactly when I wrote it, but I believe I was 21 at the time, if not, younger. It’s the story of a fledgling dragon who goes to some pretty serious lengths to prove to the older, stronger dragons in the land that he’s no helpless whelp.

Seeing as how this story comes from some of my earlier days when I was making a determined attempt to become a published writer, it’s not exactly a reflection of where I am right now with my language and ability to spin a good yarn. My raw, unrefined craft of years ago is definitely on display here, but I still find this story entertaining, and I hope you do, as well.